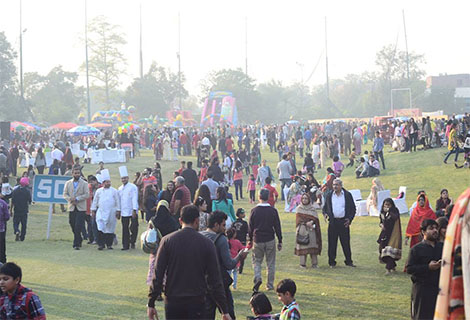 SOS Children’s Villages Pakistan organized a Children's Carnival on Sunday, November 23, 2014 at the Royal Palm Golf and Country Club, Lahore. The fundraiser was organized for the benefit of the orphaned and abandoned children in our care. Children accompanied by their families were entertained at the carnival. There were different fun filled activities including stalls by different corporate groups, food courts etc. Read More → 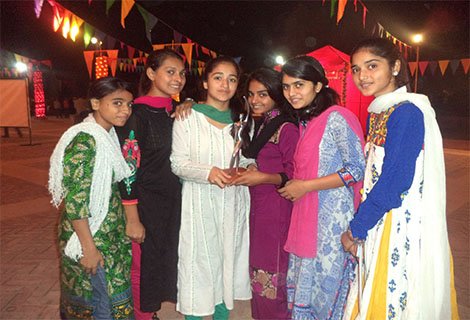 We are happy to inform that children from SOS Children's Village Lahore, who performed a play on "Child Rights" at the 13th Youth Performing Arts Festival 2014, won a special award (Junior). Congratulations to the participants who had made a sincere effort for achieving this success. 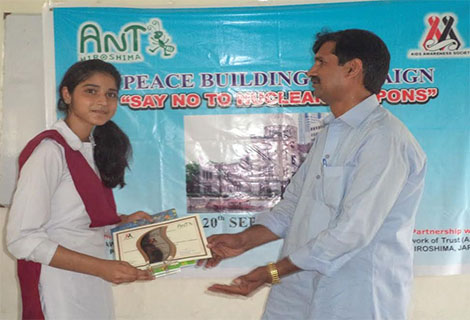 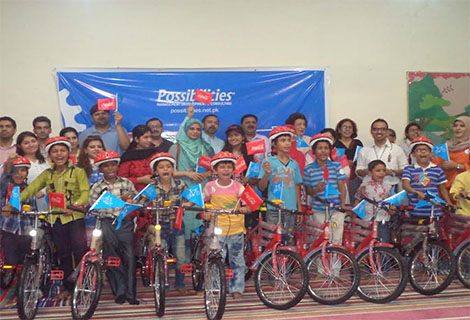 Possibilities - Management Development & Consulting Company headed by Mr. Qaisar Abbas visited SOS Children's Village Lahore and presented 10 Bicycles sponsored by Coca Cola.Children assembled the bicycles with the help of the Coca Cola staff and were simply ecstatic at getting their first bike. Mr. Qaisar Abbas also showed a documentary on his life, how he was able to achieve his goals in life through hardwork and perseverance. 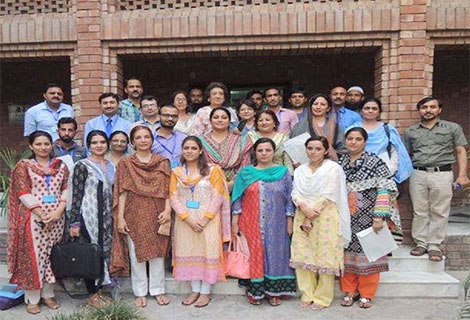 A two day Sponsorship Software Training workshop was organized by the SOS National Office, Lahore. The objective of the workshop was to acquaint the SOS Village Directors and Sponsorship Coordinators with the newly developed centralized software system. This system will assist in coordinating and monitoring the activities of all the SOS Villages in Pakistan along with increasing their work efficiency and transparency. The database, for example, helps in the assessment of individual development needs of the child and reports on various key performance indicators, among other things. 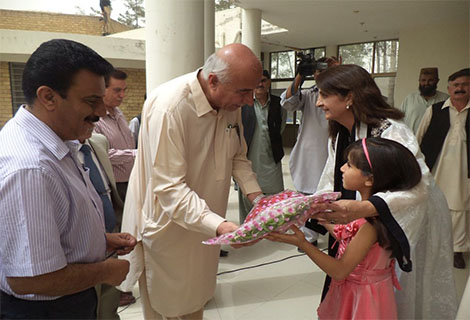 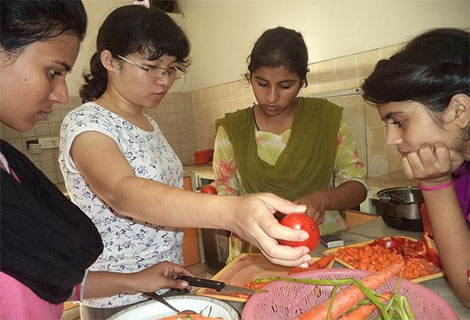 Girls at SOS Children's Village Lahore took a Cooking class from a Chinese volunteer. Cooking Classes are the best way to enjoy food and Chinese cuisine for our SOS girls. 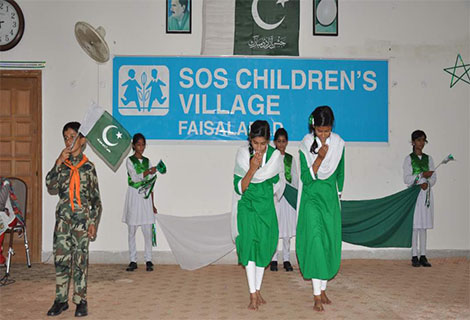 August 14, Independence Day of Pakistan was celebrated at SOS Children's Village Faisalabad with great zeal and zest as it was started off with the Flag hoisting ceremony. Children performed on the national songs and they appeared in specially designed dresses on the stage and got lot of appreciation and love. 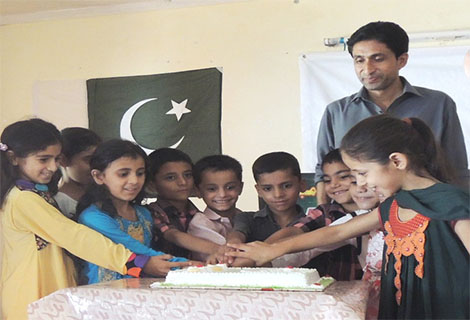 The Independence Day was celebrated on 14th August 2014 with dedication, enthusiasm and pride. Girls painted their hands with Henna and the National Flag was hoisted. To celebrate the occasion, a special function was organized in the SOS Children’s Village Dhodial in which different activities were performed like musical show, debate competition and art performances.The village was decorated with the Flags of Pakistan. Sahil Foundation arranged a puppet show for children. 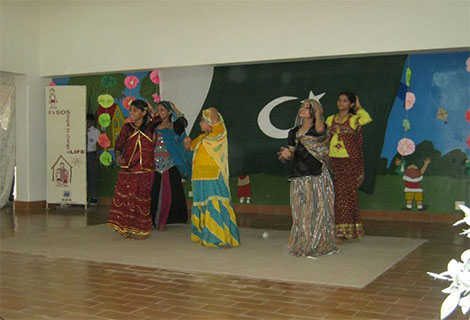 Independence Day was celebrated with great enthusiasm at the Karachi Village. All Village and Youth Home and ex- children also participated, gathered at the Village auditorium. The Ceremony started with the recitation of the Holy Quran. National anthem and National Song “Jevay Jevay Pakistan” was beautifully performed by the SOS Band. 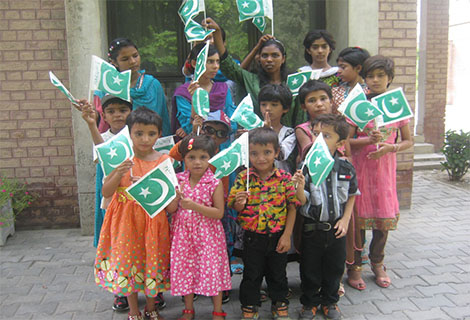 Independence Day has a great significance for every nation. It reflects the solidarity and stability of a nation. On recent 14 August, independence was celebrated here in SOS Sargodha with full enthusiasm and passion. On this auspicious occasion of the day children were much more excited and passionate for celebrations.Children were so much busy in decorating their houses with bunting. 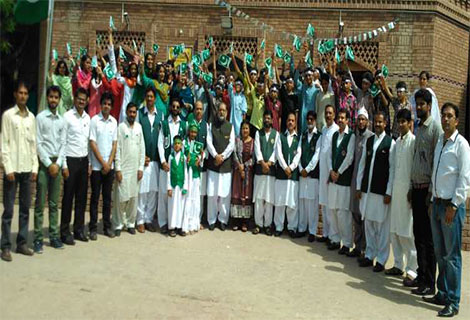 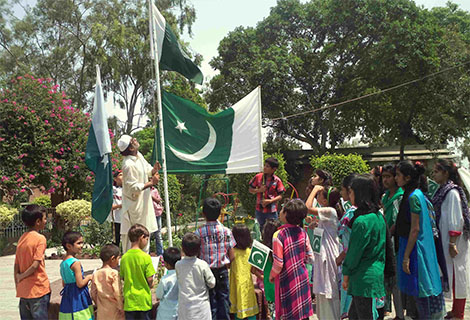 Children of SOS Village Lahore celebrated Independence Day with great enthusiasm. Celebrations began with a flag hoisting ceremony followed by the singing of the National Anthem.The Children were joined by a renowned Biker and a long time Visitor Mukaram Tareen with his team. 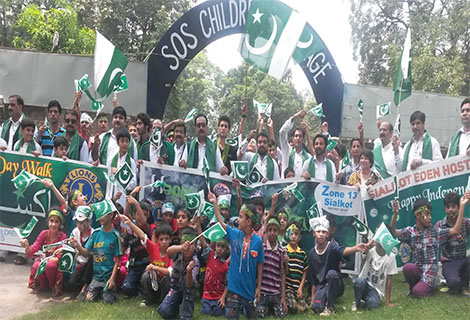 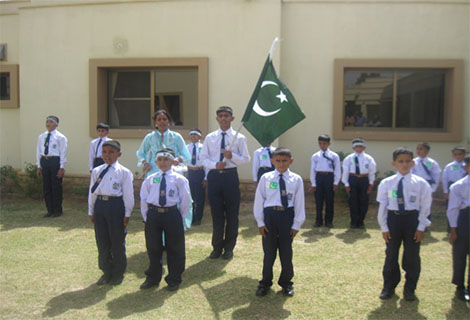 Children actively and enthusiastically participated in 14th August celebrations. Independence Day was celebrated at the SOS Children's Village Jamshoro on the spirit of patriotism. Flag hoisting ceremony was held. This was followed by different performances given by the children including the march-past, singing of the national anthem, national songs, debate, dance and tableaus. 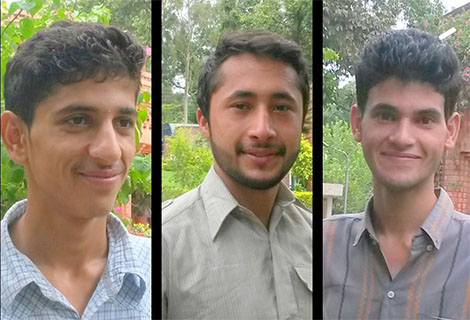 Matric result 2014 of SOS Children's Village Sialkot is here. We hope you'll be as pleased with the results as we are. Six boys appeared out of which three got first division obtaining 773,746 and 686 marks and three got second Division obtaining 632, 502 and 646 marks. Congratulations to Ahmad, Abdullah and Danish for securing 1st division. 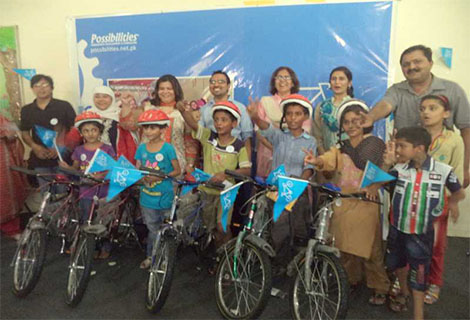 Mr.Qaisar Abbas and his team from Possibilities - Management Development & Consulting visited SOS Children’s Village Lahore and gifted bicycles to the children. They looked around our facilities and appreciated the work we do for the orphan and abandoned children. We are very thankful to the team "Possibilities" for their generous support and for showing interest in our organization. 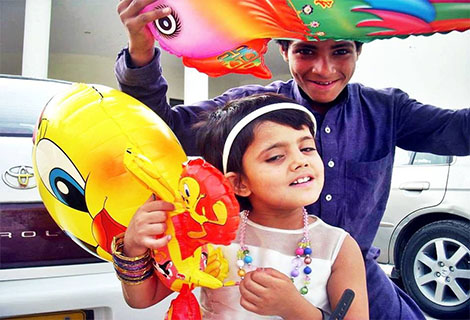 A small event was organized for the children of SOS Children’s Village Quetta in which the children enthusiastically participated and enjoyed themselves. There were different fun filled activities including Camel riding, water fighting, balloon flying and cotton candies. It was a pleasant and joyful day for the children. 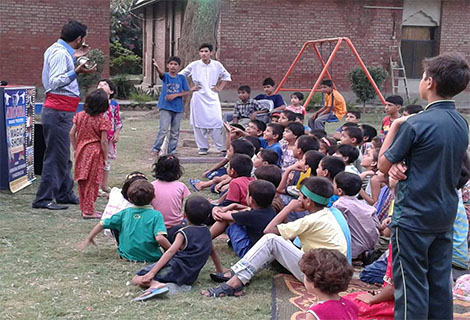 Chand Raat was celebrated at the SOS Children’s Village Lahore on the 28th of July 2014.Puppet & Magic shows were sponsored by 'King Balloon'. We are thankful to our sponsors for setting up the stalls and the event. We would also like to thank our volunteers who participated in the event, and the donors who generously donated for this special cause.